Chocolate macarons. Not quite there yet!


Today has been bittersweet.
Considering that it has been a really long time since I've had a whole weekend off and a lazy lazy sunday afternoon without having to worry about interviews or procrastinating studying ; spending all afternoon baking was nothing but pure bliss. 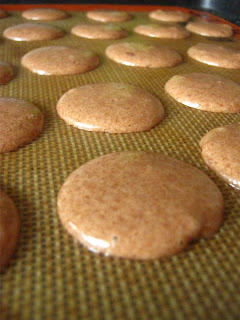 If good ol' chocolate chip cookies are like the girl next door, then french macarons are like the Diva that has an endless list of bossy demands.
Now I've made an attempted to make french macarons before,and I ended up with a flooded mess of macaron batter.Let me be honest here. I'm not really the kind to be called chicken.I mean,I can handle a few bumps and bruises and I've had my fair share of kitchen disasters.But french macarons scare the living daylights out of me.
Wait a second.

Anyway,as I was saying,it's pretty easy to be fooled by these gorgeous looking cookies.I mean ,how hard can it be right?
Just whip the egg whites,fold in the almond powder and sugar.Pipe.Rest .Bake.
Right?


Yup,I thought so too.
But apparently, life isn't that easy.
These little fellows turned out to be more moody than I expected..
When I piped them out they looked perfect.They spread just the right amount.They rested well.The shell formed.They got all shiny.And then I put them in the oven.
Kaput!
In less than two minutes,20 out of 25 macarons had cracked.
:(
Luckily I had 3 more batches resting, and everytime I baked them there was some fault or the other.
They cracked,they didnt have 'feet' they stuck to the butterpaper and what not.
So all in all,everything that could go wrong,DID!!!
Oh,I also discovered that you could burn french macarons!! :|
Anyway,I managed to save these two and filled them up :)